A Decision Making Unit (DMU) shows who will be involved in the buying process, but how do you find these people?

You have a product or service that you want to sell, but you find that to do so you need to convince several people first.

I’m going to show you:

Let’s start with an explanation…

What is a Decision Making Unit?

A Decision Making Unit is a small group of people who influence a particular purchase or decision process.

The DMU is primarily used in B2B purchasing, but can also be used to visualize people who influence the B2C decision process.

Why setup a Decision Making Unit?

A B2C purchase usually comes from a need…

The Decision Making Unit is also often the same for almost all B2C purchases, namely it includes:

A B2B purchase (and sometimes a large B2C purchase) has a more complex decision making process.

It involves all kinds of people with different responsibilities, interests, and (information) needs.

To complete the purchase, there are all kinds of different people you need to consider.

The Decision Making Unit Canvas helps you to document the different roles so you can act on them with your team.

6 parts of a Decision Making Unit

There are 6 roles in each DMU:

I will explain the different roles to you:

The ones who have to deal with the outcome…

They are the ones whose opinion is important in deciding whether the purchase was worth it.

Suppose a company wants to buy a new office building…

The end users are the employees who will work in the office building.

Suppose a man wants to buy a new car…

Then the end-users are the man who drives the car and the family that rides along.

The influencers exert influence on the initiators and decision makers.

They do not necessarily have to be people within the organization or within the family, they can also be consultants or acquaintances.

A consultant recommends an office building in the middle of the city, as this looks more reliable to customers and so employees don’t have to travel far.

A friend says that his Tesla drives perfectly and that he has never had such a nice car.

The initiator is the one who is experiencing the problem…

The person wants the problem solved and is intrinsically motivated to do so. The initiators are probably the ones who need to start convincing the rest of the DMU to seek a solution or purchase a solution.

The HR manager notices that there is not enough space for all employees to work well.

In this case, the HR manager will need to convince the CFO and/or CEO to look at a new office building.

All the man’s close friends are buying a new car…

The man doesn’t want to fall behind his friends and needs to convince his wife to buy a new car.

The economic buyer is the person who manages the money and must permit to spend that money.

These are often also the people who negotiate, for example, the price.

The CFO negotiates with party Y to agree on a price and to free up funds.

The husband and wife together may decide to spend their money on a new car.

The decision maker is the person who is last to decide whether or not a decision is going to be made.

They have the power and authority to exercise the final say and are ultimately responsible for the decision made.

Often the economic buyer and the decision maker are the same person.

The CEO of the company is the one who ultimately decides whether the new office building will be purchased.

The husband and wife can decide together whether to buy the car.

The gatekeepers’ job is to keep you out…

Think of a secretary who needs to protect the time of important people or people who need to protect their own interest and keep you out.

The landlord (saboteur) of the existing office building might offer additional space to keep the company from leaving.

In addition, a gatekeeper could be a secretary tasked with protecting the CEO’s and/or CFO’s time.

The wife could be a gatekeeper, perhaps she thinks a new car is a waste of money that could be better spent.

How to identify the members of your Decision Making Unit

Download the Decision Making Unit Canvas and complete it with me: 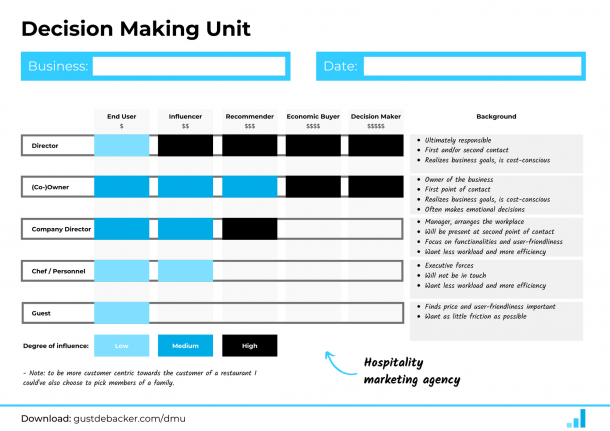 Good choice! Check your e-mail for the resources...

To map out the DMU, you need to get to know your customers well…

It is important to know the following:

You can find out by:

The ‘mom test’ provides a nice visualization of this:

I’ve created an example for you of a company that lacks expertise in and/or marketing capacity:

You could expand this to include components such as what kind of information someone needs, how big any costs might be, or what important factors are.

What is your decision?

So, now you are armed with enough information to see who is influencing your decision making process…

Let me know in a comment what you think of the Decision Making Unit Canvas.

P.S. if you would like additional help let me know at [email protected]

Tip: use the TAM SAM SOM model to find your most potential customers.

What is a Decision Making Unit?

A Decision Making Unit is a small group of people who have influence over a particular purchasing or decision making process.

What is a Buying Center?

A buying center or Decision Making Unit (DMU) is a small group of people who have influence over a particular buying or decision-making process.

What is a B2B Decision Making Unit?

In a B2B Decision Making Unit, you often have an end user, influencer, initiator, economic buyer, decision maker and a gatekeeper. It is important to show how a problem flows through the organization.

Who is the gatekeeper in a DMU?

The gatekeeper (or saboteur) is a person who does not benefit from a particular decision or purchase being made. Think of the secretary who has to reserve the time of important people or the old supplier who loses his customer.

I try to help business surpass their growth ceiling with my content. 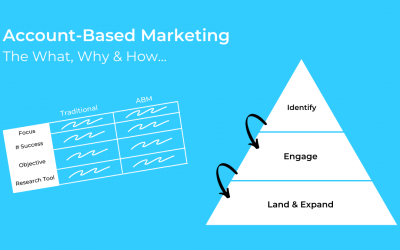 Account-Based Marketing (ABM): What, Why and How [B2B] 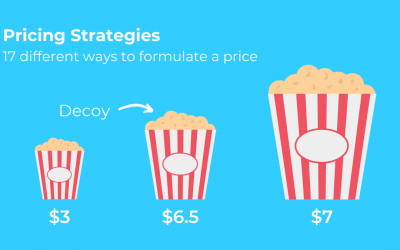 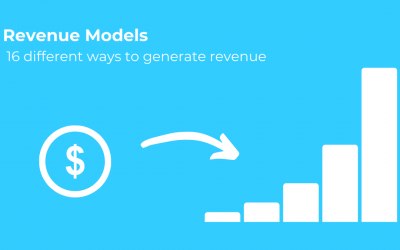 GROW Your Business With The 9 Best Templates!

✔  Discover the secrets of successful companies.

✔  Never miss out on any growth for your company. 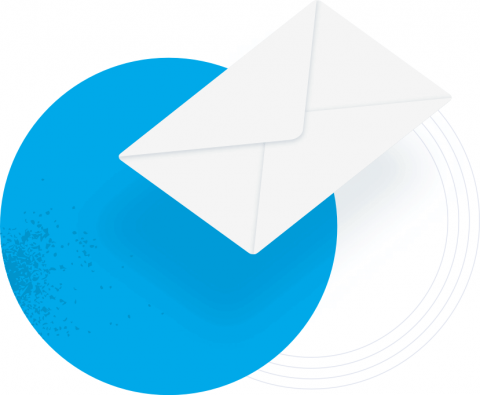 ✔  Up-to-date on the newest developments.